YouTube video
You'll need something like the approach in the video. Just tweak it to account for the different angle - you want positive y direction instead of x.

HarryW said:
How do you calculate the angle for any second point ?
Click to expand...

Hi Harry. If your son has recently been introduced to angles, then I suspect you don't literally mean any other point. There are a number of angles that we call "special angles" (because they are the easiest angle measures to work with), so I suspect that beginning students would be working with points chosen specifically to produce such special angles. Does your son's assignment list coordinates of other points? It would be helpful to see examples of the information that's provided with the questions, to confirm what type(s) they are.

The tangent of an angle is the ratio of the opposite side of a right triangle to the adjacent side. In this case, that is x/y: 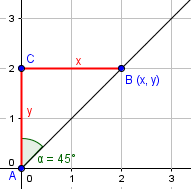 ​
So you need to use the inverse tangent function.

There's a little more to consider when the angle is not in the first quadrant, so that the inverse tangent would be negative or give the opposite angle. Is that the part you are confused by? 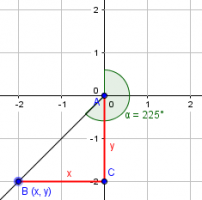 ​
In programming, we use a special "atan2" function that takes almost all of this into account. Is that what you will be doing?

(By the way, you are going clockwise, not anticlockwise.)

FYI: The 'insert media' tool broke, after a software upgrade. (I've fixed your video link.) Links to YouTube videos must now be constructed manually. Two methods are discussed in this thread.

Thanks for the swift reply, folks.

First off, a few things about my son. He is past school leaving age and part of his unique life is he "fascinates" on topics and this fascination can run from a few days to a few months. His current line of fascination is geometry hence the question that he posed today. It is also difficult to determine the level of his mathematical understanding as this, like almost everything else, depends on his currrent satate of mind?

I do believe that he is attempting to convert polar to cartesian values but has put his own unique spin on the problem? I'm quite happy with the theory of doing this but unfortunately this does not answer the question he posed and unfortunately due to his Autism he only wants the answer to the problem not another way of looking at and solving it.

I hope this goes someway to explain the situation and hence my turning to you good folks for the answer.

HarryW said:
I do believe that he … has put his own unique spin on the problem? [Theory] … does not answer the question he posed … he only wants the answer to [his] problem not another way of looking at [or] solving it.
Click to expand...

Hi. I understand that your son is not doing schoolwork or taking a traditional approach to math learning. Your comments mentioned above present a conundrum for us. As tutors, our first goal is to comprehend things like a person's perception and topic experiences.

Do you know what got him interested in geometry? What sorts of materials is he looking at?

Has he written any work on paper that you could share with us? Anything that would provide more context about what he's thinking.

Speaking for myself only, I haven't been trained to help people experiencing specific, organic learning challenges. Without additional context, I couldn't even guess about the sorts of information that you son would receive as helpful to his thought processes. I think you'll need to play the major role in determining what kind of help your son requires, and we can then assist by answering your specific questions.

The polar grid is scaled as the unit circle with the positive x –axis now viewed as the polar axis and the origin as the pole. The first coordinate r is the radius or length of the directed line segment from the pole. The angle θ, measured in radians, indicates the direction of r. We move counterclockwise from the polar axis by an angle of θ, and measure a directed line segment the length of r in the direction of θ. Even though we measure θ first and then r, the polar point is written with the r-coordinate first. For example, to plot the point (2, π/4), we would move π/4 units in the counterclockwise direction and then a length of 2 from the pole.

When given a set of polar coordinates, we may need to convert them to rectangular coordinates. To do so, we can recall the relationships that exist among the variables x, y, r, and θ, from the definitions of cos θ and sin θ. Solving for the variables x and y yields the following formulas: