Source of inspiration for invention of Calculus 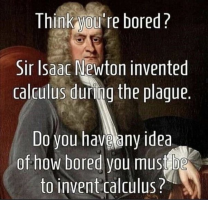 I searched for a meme elevating Leibnitz at Newton's expense, but I couldn't find anything sufficiently denigrating. (Where's @DripKracken when I need him?)

Hence, I'll simply post that, were the plague to have killed Newton, the world would've still had the initial calculus at the same point in time (and with a better notation, too).

So what kind of new science can we expect from Covid19?

Two things I'd read about are inventions, likely products of new science coming out of global research efforts: 1) desktop gene synthesizer and 2) a method for isolating antibody profiles from patient's blood plasma. There's bound to be a lot more examples, like these rapid tests. I can't judge the relative import of most technical stuff I hear about, but it all sounds good!


Some article said:
A team of researchers has developed a new nanomechanical technique for fast, one-step, immune-affinity tests, which can quantify the immune response induced by different COVID-19 variants in serum.
Click to expand...

And since calculus was not directly tied to the plague, but just a result of having time to work alone (if that), who knows what someone might have had time to think about ... if it weren't for Zoom and all the other technologies that kept us from being really isolated. Likely many of the great inventions this time were replaced by cat videos.

On the other hand, I just discovered this excellent article:

The idea that the bubonic plague woke the brilliance in Newton is both wrong and misleading as a measure of how well we apply ourselves during our own plague spring.

Newton was able to do what he did not because of where he happened to find himself during the plague but because of who he was—one of the handful of greatest mathematicians and natural philosophers of all time, who, for several years, was able to do almost nothing else with his time but think, reason, and calculate. Against that history, telling yourself as you shelter in place that now is the time to emulate Newton’s ambition is not so helpful. Not because his is an impossible standard (though it is) but because the real lesson is to remember whatever aspect of your life that fired your passion before this mess—and to keep stoking it now.
Click to expand...

So if you happen to be a Newton during this time, just be yourself!