In simpler terms, that means if A is always twice as much as B, then they directly vary. If a gallon of milk costs $3, and I buy 1 gallon, the total cost is $3. If I buy 10 gallons, the price is $30. In this example the total cost of milk and the number of gallons purchased are subject to direct variation -- the ratio of the cost to the number of gallons is always 3.

To be more "geometrical" about it, if y varies directly as x, then the graph of all points that describe this relationship is a line going through the origin (0, 0) whose slope is called the constant of variation. That's because each of the variables is a constant multiple of the other, like in the graph shown below: 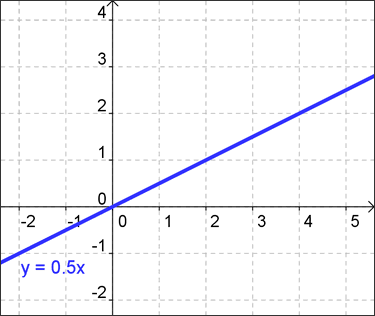 How do I Recognize Direct Variation in an Equation?

Plug the given values into the equation \(y = kx\).

Then replace k with its value in the equation \(y = kx\).

When two quantities vary directly, their ratio is always the same. We'll create two ratios, set them equal to each other, and then solve for the missing quantity.

By definition, both ratios are equal:

Multiply each side by 12 to solve for y:

Got a basic understanding of direct variation now? If you still need more help, try searching our website (at the top of the page) for a more specific question, or browse our other algebra lessons. Sometimes it helps to have a subject explained by somebody else (a fresh perspective!) so you may also be interested in another lesson on direct variation, such as this page that provides examples solving direct variation.

Two variables vary directly if their ratio always remains the same; when one doubles so does the other.