A point shows location and has no size or dimension. A point is represented by a dot and is usually named with a letter of choice. In the graphic below, the points are labelled by a nearby letter.

A line is a set of points extends in two opposite directions without end. A line is one-dimensional and has no width. It is identified by naming two points on the line or by writing a lowercase letter of choice after the line.

The notation, for example, AB (written with a line symbol <---> over the letters), is read as "line AB" and refers to the line that has points A and B.

A plane is a flat surface that has no thickness and extends without ending in ALL directions. It is a two-dimensional object. A plane is represented by a parallelogram and may be named by writing an uppercase letter of choice in one of its corners. I will go into detail about what a parallelogram is in future lessons. For now, think of a parallelogram as a "window pane."For simplicity, you might want to think of a plane as an infinitely large sheet of paper.

The diagram below shows three points, a line, and a plane.

A line line segment is part of a line having two points, called endpoints. It also has points between the endpoints. A line segment does not have a set of CONTINUOUS points like a line does. Endpoint means that a line has a beginning and an end. The notation for a line segment in a bar over any letter of choice. Say AB has a bar over it, you would read it as "line segment AB."

A ray is part of a line having one endpoint and a set of all points on one side of the endpoint. A ray is always named by using two letters of choice. The first letter must be the endpoint. We draw an arrow with an endpoint over the letters.

An angle is the union of two rays having the same endpoint. The endpoint of an angle is called the vertex; the rays are called the sides of the angle. 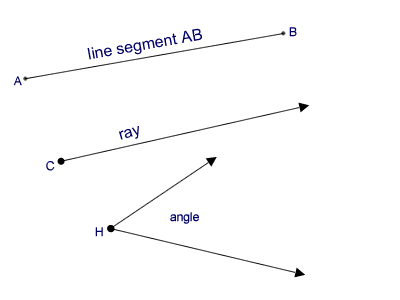 There are a few additional terms in geometry that need to be understood as well. They define relationships between geometric objects:

Collinear Points: points that lie on the same line.

Coplanar Points: points that lie in the same plane.

Opposite Rays: 2 rays that lie on the same line, with a common endpoint and no other points in common. Opposite rays form a straight line and/or a straight angle that equals 180º.

Parallel Lines: two coplanar lines that do not intersect.