Two angles may share a certain relationship that will be useful in solving a geometric problem. Determining that a pair of angles is complementary, supplementary, or vertical may be useful in determining other unknown angles. 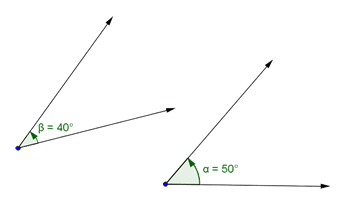 Using this knowledge, we can begin to solve for unknown angles:

Let x equal the degree measure of the smallest angle.

Why do we equate x + 14x to 90 degrees? This is done because we are dealing with complementary angles. That means the sum is 90 degrees. We called the smaller angle x, so the larger one must be 14x because we know it's 14 times larger. Therefore, the small angle (x) plus the larger angle (14x) must equal 90 degrees (because they are complementary).

We now simply solve for x:

The smaller angle measures x degrees, so it is a 6 degree angle. The larger one is 14 times x, so it is 6*14 = 84 degrees. It may be important to remember that the problem specifically asked for the smaller angle, so make sure you give the answer the problem is looking for!

These are similar to complementary angles, except their sum is 180 degrees. Often you will see supplementary angles created in a ray shoots out from a flat line, such as below:

Let d = the degree measure of the angle.

Then, of course, 180 degrees - d = the degree measure of the supplement of the angle. Is that clear? To say it another way, the supplement is whatever we have to add to d to equal 180.

We now set up an equation keeping in mind the word TWICE.

Wow... where did that equation come from? Let's look at it step by step. The problem starts by saying "the degree measure of an angle is," and that's where the "d =" part comes from. Then it says "30 degrees greater than," which explains the "+30." The last part says "Twice the degree measure of its supplementary angle," which means "2*(180-d)."

We now solve for d:

What is a vertical angle anyway?