Hello everyone. My child came home with a tangram from school and to be honest I'm scratching my head because nothing ads up. Can anyone help us please?

I think the laws of sines and cosines will help here.
K

we have tried to do it this way but the problem is that even though you have all 3 angles its difficult to add them so they fit that square. I,ve even tried adding angles from few of them to find at least one corner

Kamil said:
Hello everyone. My child came home with a tangram from school and to be honest I'm scratching my head because nothing ads up. Can anyone help us please?
Click to expand...

As far as I can tell, you are just supposed to use a protractor and ruler to make each triangle. Where are you having trouble? Have you tried making all six triangles?

And where does the triangle you show come from? I don't see any mention of 17.3.
K

well we did make all of the triangles but when we'we tried to put them all toghether it does'nt create a square. the 17.3 is the lenght one of the square sides.

Could you show all your triangles (ideally labeled with the given parts) so we can check out whether they are correct, and see if you just missed a way to fit them?

I found the time to construct the six triangles:

It certainly is not obvious that these can fit together to make the square! (Keep in mind, though, that some of them might need to be flipped over.) Do they agree with yours? Have I misread anything?

I would not be surprised if measurements were inaccurate (likely measured from pieces cut out from an actual square?), rather than having been calculated exactly; and some might have been copied wrong. The total area is approximately correct, at least.
Last edited: Jan 13, 2020
R

A quick sanity check on this problem is to verify that the areas of the triangles do in fact sum to the area of the square.

I think I'd check that before spending hours trying to figure out how to arrange them.
K

hello everyone. thank you very much for all of your replies. I hope the math teacher will give us an answer to this. Dr. Peterson thank you for making the triangles. I've found some time at work and made triangles out of thin metal sheets that have been cut out using a computer operated cutter. And its hard to make a perfect square. will keep you guys updated. iI just really hope that she is'nt making that up just to make kids show effort. kind regards Kamil and Maja

Did you find the solution to this?

Alright, there's a way to figure this out. I don't know the answer, but I have some ideas of how to get there. If all else fails, we can employ some brute force (there are only so many combinations, right?)... Given how all of the figures in the problem are expressed only to the tenths digit, I'm inclined to think that there is some rounding involved and that the exact geometric shapes as specified will not actually fill a square of any dimension. But it might get close enough for government work, so let's take a look.

Triangles have three legs and three angles (duh). If we know any three of those numbers (except the three angles), we can calculate the other three. We can also craft some tailor-suited formulas for determining the areas of the given triangles.

When all three side lengths \(\displaystyle a, b, c\) of a triangle are known, Heron's formula gives us the area:

Given two side lengths \(\displaystyle a, b\) and their included angle \(\displaystyle C\), the area of the triangle can be found by applying the law of sines in the following way:

This describes two angles \(\displaystyle A, C\) connected by a side \(\displaystyle b\). The law of sines helps us again here: first we determine the missing angle, then one of the missing sides, then use the Side-Angle-Side formula to calculate the area:

The sum of the areas of these triangles is the "definitely not a natural number" \(\displaystyle \approx 309.3218\), making the side length of the square \(\displaystyle \approx 17.5875\). The original photograph depicts a triangle with a length of 17.3 that appears to be about the same as the square printed on the worksheet, so we might be in the same voting district as the ball park.

From here, we can test combinations of triangles where the side lengths add up to more-or-less 17.6cm. We also know that the angles of the triangles that meet in the corners of the square need to add up to somewhere in the neighborhood of 90°.
Last edited: Jan 22, 2020

It sounds like hard work to do a brute force investigation of this problem. I'm pretty sure the name for this is a "nesting algorithm". There seems to be some open source free versions available nowadays. But I think that I'll wait to see what the teacher has to say about the problem! But I might draw out a nice 17.6cm square for my traingles to fit in - thanks @Mr. Bland for calculating that!

Today I wanted to recycle the paper triangles that I made for this question. But I thought I'd try one last time to fit them together.

I wrote some code to list combinations of angles that sum to approximately 90o, for the 4 corners of the square. This produced quite a lot of results. So I reduced this by specifying only one angle can be used from a small triangle AND only 2 angles from a large triangle (because a large triangle could lie along an edge of the outer square).

Anyway, the result I came up with is far from perfect - but I think it is probably the intended solution.

If you refer back to Dr Paterson's drawing in post#7, I call the triangles "ABC" on the top row and "DEF" on the bottom row. Mr Bland's square is shown in green. 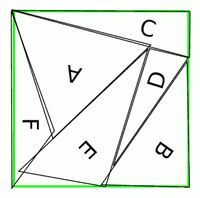 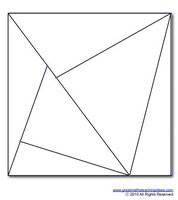 this is not my work i found it online. I think it is the right one

these are the measurements for the triangles in the solution

The image we were given made the 18.6 for the first triangle look like 13.6. Maybe if that hadn't happened, we might have figured it out.

I still don't like the problem, though. It's not quite exact enough to avoid being frustrating.

Correct me if im wrong, but i think it is 18.6. i think it looks faded because of where the paper was folded or how it got rubbed. If you look at the 15 below, you can see it is also faded.

I know this is a little off-topic, but aren't tangrams a Chinese invention?
I seem to remember seeing a solution for many of the arrangements somewhere.

firemath said:
I know this is a little off-topic, but aren't tangrams a Chinese invention?
I seem to remember seeing a solution for many of the arrangements somewhere.
Click to expand...