The degree measure of the four angles add up to 360 degrees. This is actually true of any quadrilateral. Let lower case letters a, b, c and d represent the angles of trapezoid ABCD.

The corresponding pairs of base angles, such as A and B, or C and D, are supplementary (add up to 180 degrees).

This is an isosceles trapezoid, called ABCD: 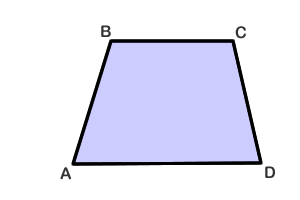 It has the following characteristics:

The diagonals have the same lengths.

In isosceles trapezoid MATH, side HT is parallel to side MA, line segment MH is congruent to line segment AT. The degree measure of angle MHT = 60 degrees. What are the measures of the other 3 angles? 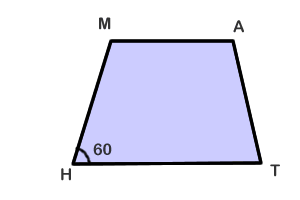 We know the two legs are congruent, so this is an isosceles trapezoid. Given that, we know the two base angles (T, H) have the same measure. Because we were given angle H to be 60, we can also say that

Since the top and bottom angles are supplementary, we know that